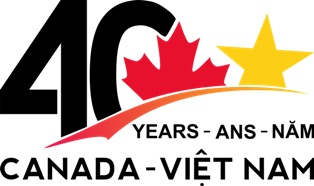 Addressing the celebrations, the vice chairman of the Municipal People’s Committee Hua Ngoc Thuan stated that over the past 40 years, the stable partnership between both countries has been considerably developed.

Trade between HCM City and Canada reached more than $265 million in 2012. Currently Canada has 50 ongoing projects worth $91.5 million in the city.

He pledged that the municipal authorities would create the best possible conditions for Canadian investors who wish to invest or do business in the city.

Canada’s Consul-General to HCM City, Audri Mukhopadhyay, said the good relations between both countries could be seen in the development of trade, economics, education and training.

Over 3,000 Vietnamese students currently study in Canada and several education programmes between both countries have been developed in HCM City, according to the Consul-General.