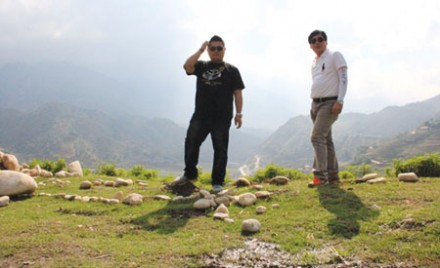 HA NOI (VNS)— Two South Korean men, Chang Sung-taek and Ahn Joung-ho, are on a two-month car journey from the north to the south of Viet Nam to get a panoramic view of the country’s culture, custom and cuisine.

They want to publish a book of photographs and a description of their journey when they get back to South Korea.

The idea for the journey came from Chang, a 24-year-old student from the Ha Noi National University, who works for the international non-government organisation Good People International. He has lived in Viet Nam for 10 years and considers the country his second home.

“Most of my friends in South Korea only know about Ha Long and Nha Trang bays, while the country has many other beautiful spots,” said Chang.

“I had travelled to some places in three regions of the country but it was not enough for me.

“I asked my friend Ahn to join me. I want to take notes and photos to share the beauty of all destinations in Viet Nam with my friends.”

Ahn, a professor at Namseoul University in Cheonan, South Korea, came to the country on a business trip three years ago, intending to stay several months. But he stayed on.

“Like other Koreans, when I thought of Viet Nam, famous icons like Ho Chi Minh and Ha Long Bay immediately sprang to mind, but when I got here I had a chance to understand more,” Ahn said.

Chang said: “The mountain roads and dangerous bends gave us a few problems. They may be the most difficult roads we will ever pass in our lives.

“We got a puncture from one of the rugged stones which fell from the mountainside after rain; many ethnic people came to us to help but they couldn’t speak Vietnamese.

“Like many people in such remote regions they only speak their ethnic language. So we tried to use signs to communicate.”

Visiting the central region in mid-summer, the two travellers were struck by both the natural beauty and the severity of the weather.

“It was baking sun and dry wind,” Chang said. “It gave us a lot of respect for the local people who still work diligently through all seasons.”

So far, the trip has left a deep impression on Ahn. It’s satisfying his demand to discover new horizons and will help him make another decision.

“I’m nearly 40 years old and have to decide whether to stay on in Viet Nam or go back to Korea. It’s a choice that will change my life forever.

“It’s like finding an 18-year-old girl who’s nice and beautiful at once to date.” — VNS