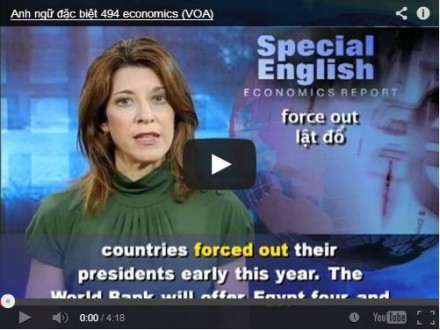 The “Arab Spring” in the Middle East and North Africa has raised hopes and dreams. But can it raise money to invest in a better future?

How to respond to the Arab uprisings was a major question for world leaders at the Group of 8 meeting in France in late May. Earlier, the head of the World Bank said international support can speed progress — “but only if coupled with real reform.”

President Obama discussed American development plans in his Middle East policy speech on May nineteenth. He said: “The goal must be a model in which protectionism gives way to openness, the reins of commerce pass from the few to the many and the economy generates jobs for the young. America’s support for homecracy will therefore be based on ensuring financial stability, promoting reform and integrating competitive markets with each other and the global economy. And we are going to start with Tunisia and Egypt.”

Democracy protests in those two countries forced out their presidents early this year. The World Bank will offer Egypt four and a half billion dollars in loans over the next two years. The money would be part of a plan with the International Monetary Fund to help control Egypt’s budget deficit.

The goal is to improve the country’s credit rating in order to ease the concerns of investors and reduce borrowing costs. About two billion dollars in loans would be linked to progress in government reforms.

The World Bank also promised at least one billion dollars for Tunisia.

Twenty years ago, the European Bank of Reconstruction and Development was created to help former communist countries after the fall of the Soviet Union. Now, that bank could invest up to three and a half billion dollars in the Middle East and North Africa.

About four hundred million people live in those two areas. A majority are under the age of thirty. The anger of the many educated but unemployed young people has been a driving force in the Arab Spring movement.

Oil is the main export for many of the countries. Yet a recent World Bank study showed that oil has not done much to raise wages. Income growth continues to fall behind East Asia and South America.

Private investment has been limited largely to the oil industry. There are some efforts to change that. In March, Secretary of State Hillary Clinton promised two billion dollars through a government agency known as OPIC, the Overseas Private Investment Corporation.