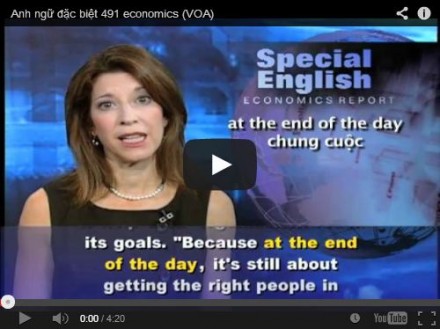 The job market is more competitive than ever for millions of workers around the world. In America, one reason for that right now is high unemployment after the worst recession since the nineteen thirties.

But other reasons involve changes in the needs of the American and global economies. In big developing economies like India and China, high turnover rates mean workers often move from job to job.

These days, many job seekers go online to connect with employers. Job candidates want to show they have a lot to offer. But in many cases they simply apply for a job title and list their work experience. Instead, they should describe the talents and abilities they could bring to an organization.

That’s the advice of Steve Langerud, director of professional opportunities at DePauw University in Indiana. He advises students on career planning and often talks about workplace issues in the media.

He says social media sites are valuable when they show the abilities of job candidates and not just their job title and experience. He says: “This really is a talent economy, and we’re stuck with most job seekers presenting themselves in a job title mode. And I don’t think it matches very well.”

Steve Langerud also says employers should think harder about the skills they really need to help their organization reach its goals. “Because at the end of the day, it’s still about getting the right people in the right place at the right time and then keeping them.”

Ben Kirshner is the founder and chief executive of a media marketing company in New York called Elite SEM. SEM is search engine marketing. His company’s job is to help businesses improve their websites and search engine results.

Ben Kirshner says when his company is searching for candidates for new positions, it first looks within; it considers existing employees. After that, he says, social sites can be valuable. Twenty-five percent of new hires come from social media. Seventy-five percent “typically come from word of mouth” — in other words, recommendations from other people.

Elite SEM uses sites like Facebook, Twitter and LinkedIn to learn about job candidates. LinkedIn is a networking site for professionals, so users might be more careful about what they say. But Mr. Kirshner says a site like Facebook can also provide a lot of information — good or bad — about a person. So pay attention to what you put on the Internet and what others put online about you.