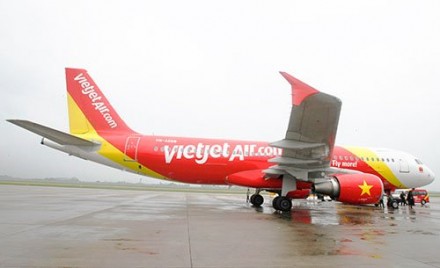 HCMC – VietJet Aviation Joint Stock Co. (VietJetAir) in a stunning move on Wednesday cut deals in France to acquire 100 Airbus A320s in an ambitious strategy to expand its fleet to fly to key destinations worldwide by 2022.

European plane maker Airbus said on Wednesday that VietJetAir had signed a memorandum of understanding (MOU) for up to 92 new, fuel-saving A320 family aircraft and lease of eight more from third party lessors.

Airbus clarified in a statement sent to the Daily last night that the purchase agreement signed with Airbus on Wednesday included 42 A320neo, 14 A320ceo and six A321ceo, plus 30 purchase rights for the A320 family.

Luu Duc Khanh, managing director of the private carrier VietJetAir, confirmed the MOU with the Daily via SMS messages last night. “I just signed the MOU,” he said and added that the new A320 family aircraft would be delivered to VietJetAir from next year to 2022 as planned in the agreement.

Both VietJetAir and Airbus did not unveil total value of the deal, which showed the Vietnamese airline’s ambitious plan to become a major low-cost carrier not only in Vietnam but also in Asia. However, Reuters put the value at US$10 billion.

VietJetAir has ousted another domestic no-frills carrier Jetstar Pacific as the second largest airline in Vietnam nearly two years after it joined the country’s aviation market. The private carrier has transported more than three million passengers on its 14 domestic and two international routes.

VietJetAir is the first private airline in Vietnam to operate domestic and international flights. This airline now operates eight leased Airbus A320s and its ninth fuel-saving, Sharklet-equipped Airbus A320 aircraft has just been delivered new from Airbus via the U.S. leasing company AWAS.

“The A320 has proven to be extremely efficient in service with VietJetAir and is a favorite with our passengers,” Khanh of VietJetAir said in the statement.

John Leahy, chief operating officer of Airbus for customers, said in the statement that Airbus welcomed VietJetAir as “a new customer of Airbus” when signing the MOU.

“This important agreement underscores the A320 family’s position as the preferred choice in the single aisle segment in the fast-growing South East Asian market,” he said.

VietJetAir told the Daily after the signing in Bangkok that the no-frills Thai VietJetAir was expected to service both domestic and international flights from Suvarnabhumi Airport early next year, with two to three Airbus A320 planes in the initial time.

With this joint venture, VietJetAir wants to offer more opportunities for travelers and to gradually realize its strategy to expand its wings in Asia. The carrier currently flies to Bangkok and plans to expand its services to Taiwan, South Korea, Singapore, Malaysia and Japan.

Do Thanh Dung
Lecturer of English