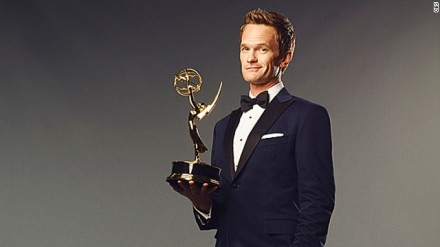 Accordingly, Harris has been actively involved with every aspect of TV’s upcoming big night.

“I become very, very particular [about] even an errant comma or a misplaced inflection,” Harris explained to Entertainment Weekly during a recent chat. “Not only the things that I say, but the presenters’ dialogue as well.”

At least the three-time Emmy winner won’t have to worry about contingency plans this time around; though Harris is up for an award this year (for Special Class Programs), it’s not a prize that will be handed out on air. (In 2009, the host lost Supporting Actor in a comedy series to Jon Cryer, then interviewed his rival from his podium.)

Will the “How I Met Your Mother” star’s micro-managing help him strike hosting gold again? We won’t know until 65th Emmy Awards air on CBS September 22 — though Harris did give a few more hints about what we can expect at this year’s show.

Entertainment Weekly: The Emmys are just two and a half weeks away. Where are you in terms of preparation?

Neil Patrick Harris:This is the time you look forward to the least. It’s the most disappointing and self-loathing time, when you think all of the things you’ve created are going to fail, and all of the people that you’re asking to participate are passing.

But! It happens every time this way, and so I can only assume that at the end of the tunnel, there is some kind of light — and it’s not a train about to hit me.

EW: Well, at least there’s a happy ending in sight.

NPH: I really should have answered by saying, “It’s great! We have tons of exciting things in store for you.” That would have been the better answer.

EW: You’ve become a go-to awards show host. At this point, has the whole concept become routine? Is hosting even nerve-wracking or exciting for you anymore?

NPH: That’s what’s the most nerve-wracking — I don’t want to seem like I have a routine that I do the same way every time. So it’s easier when a couple years go by, or a season goes by, and then I come on board again.

Having just done the Tonys, I really want to make sure that I’m not just repeating myself like a broken record. It’s a whole different medium — theater is live and a little more razzmatazz. The Emmys are honoring things on the small screen, so you can be a little broader in your scope and break the rules a little bit more. We’re going to do some things that haven’t been done before.

EW: When you hosted the Emmys in 2009, you did bring some Broadway razzmatazz to TV through that big opening number, “Put Down the Remote.” Will you do something similar this year?

NPH: The last thing I want is to compete with the Tony Awards, which I had such a blast doing — so no, I’ll be doing something different for sure. But I think that’s what’s fun, trying to come up with new ideas.

EW: You could always go with the idea that Lena Dunham recently tweeted: “Neil Patrick Harris should open the Emmys with ‘We Can’t Stop,’ only he’s dressed like a nun spanking …Hasidic women.”

EW: I guess you wouldn’t want to reference something that will be a month old.

NPH: My plan is to just do as many Paula Deen jokes as possible. All Paula Deen, all the time.

EW: Is there anything else you can say you’re not doing?

NPH: No dunk tanks this year. No live animals this year. And I don’t think Ricky Gervais is allowed. So that’s all I can tell you.

EW: What about magic?

NPH: There might be some magic elements. The network’s encouraging. Maybe [there will be] some appearance and some vanish and maybe a quick change or something that seems magic-ish — but not [anything] David Blaine.

EW: How would you sum up the mood you’re going for, generally?

NPH: I want it to be classy and smart. If I can make the three-hour show feel even like it’s two and a half hours long, then I’ve done my job. I’m just hoping to keep the energy, the mood in the room, light and celebratory.

EW: Given that you hosted the awards the last time CBS aired them, can we expect an NPH Emmys appointment every four years?

NPH: Only if the “Barney!,” with an exclamation point, spinoff gets picked up. [laughs]