Học Toeic - Dashrath Manjhi – The Man Who Moved a Mountain

Học Toeic – Dashrath Manjhi – The Man Who Moved a Mountain 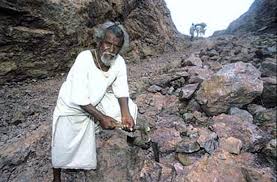 Dasrath Manjhi, a landless farmer from India, made history after he spent over two decades chiseling away at a mountain with rudimentary tools, in order to create a road for his community, when the Government refused to.

If you’re looking for some motivation, stories don’t get much more inspirational than that of Dasrath Manjhi. 53 years ago, he set out to carve a 1mk-long path through a rocky hillside, all by himself, in order to make it easier for his fellow villagers to access schools, markets and neighboring villagers. “This hill had given us trouble and grief for centuries. The people had asked the government many times to make a proper road through the hill, but nobody paid any attention. So I just decided I would do it all by myself,” Manjhi told Indian newspaper Tehelka, in 2007, a shortly before succumbing to the cancer that was plaguing him. With just his chisel, hammer and shovel, this legendary man turned what was once a precarious one-foot-wide passage into a 360 ft-long, 30 ft-wide road accessible by bicycle and motorcycle. The hill kept the region’s villages in isolation, forcing people to trek through dangerous terrain for hours just to reach their lands or the nearest market town. Children had to walk eight kilometers to reach school, but thanks to Dasrath Manjhi’s handmade road, that distance has been reduced to three kilometers, and people from over 60 villages now use it every day.

But what empowered a single man to accomplish such a monumental task? For Dasrath it was the love for his wife. “My wife, Faguni Devi, was seriously injured while crossing the hill to bring me water; I worked then on a farm across the hills. That was the day I decided to carve out a proper road through this hill,” the farmer said. Sadly, his beloved wife didn’t get to see the fruits of his labor, as shortly after the accident she fell ill and died, because she couldn’t be taken to the hospital in time. The tragic loss only made the ambitious man more focused on his task, and fellow villagers remember seeing him “ hacking at the hill day and night as if he were possessed”. But with the passing years, his motivation changed. “My love for my wife was the initial spark that ignited in me the desire to carve out a road. But what kept me working without fear or worry all those years was the desire to see thousands of villagers crossing the hill with ease whenever they wanted,” Manjhi said in an interview.

Although you’d expect people to jump in and help someone working for the entire community, it wasn’t Dasrath Manjhi’s case. At first, people ridiculed him and called him mad for taking on such a herculean task, but as time went by, and the unfazed farmer continued to split the troublesome hill in half, he started getting some help. “Though most villagers taunted me at first, there were quite a few who lent me support later by giving me food and helping me buy my tools,” he remembered. Now, all the people of the Gaya district have nothing but gratitude for the “mountain man” who single-handedly made their lives so much easier.

He never received any recognition from the Indian Government for his accomplishment, just a state burial, after he passed away, in 2007. “What I did is there for everyone to see. When God is with you, nothing can stop you,” Dasrath Manjhi once said. I am neither afraid of any punishment from any government department for my work nor am I interested in any honour from the government.” It took him 22 years to fulfill his self-imposed task, but it granted him immortality…

In July 2010, director Manish Jha announced a film, Manjhi, based on the life of Dashrath Manjhi. The film is produced by Sanjay Singh, who previously produced Udaan (2010).Dashrath Manjhi’s story was shown on Aamir Khan’s show Satyamev Jayate.Nawazuddin Siddiqui has been cast in the lead role in the film Mountain Man, which is based on Manjhi’s life. In Mandara, a Kannada film by Jayatheertha, newcomer Srikanth plays the role of Dashrath Manji, who inspires the young hero’s love.