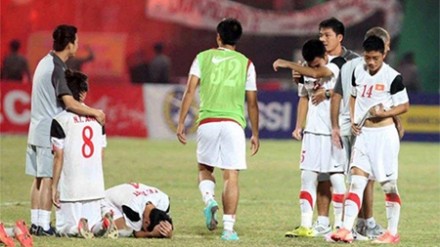 HA NOI (VNS) — Indonesia defeated Viet Nam 7-6 in a penalty shootout to claim the ASEAN Under-19 Football Championships on their home turf yesterday.

Goalkeeper Rafi Mundiato became the match favourite blocking two attempts from the Vietnamese side after another kick from the visitors went wide.

The hosts also missed two chances in the penalty, but it was still enough for them to win the championships for the first time in the nation’s history.

It was Mundiato’s day as he successfully saved consecutive attacks from the Vietnamese side who won all matches in the lead up to the final.

At the 28 minute mark, Viet Nam’s Thanh Tung lodged a ball from the left wing in a straight shot which was diverted by the talented Mundiato.

The star goal keeper continued to frustrate Vietnamese players as he continued another strong defence from an attempt from Nguyen Cong Phuong’s 10 minutes later.

Indonesia had several chances to pass Vietnamese keeper Ly Van Truong however they failed to capitalise on opportunities during the 90-minute match and the 30 minutes of extra time.

The victory also helped Indonesia recover their 1-2 loss to Viet Nam during a group round match on September 14.

In a separate match, East Timor overcame Laos 4-2 to take the bronze medal.

In other football news, Viet Nam defeated host Myanmar 3-1 to win a bronze medal at the ASEAN Women’s Football Championships which wrapped up yesterday in Yangon City.

Defender Ngoc Anh scored just two minutes into the match from a header to the left corner. Twelve minutes later Thanh Huong scored making it 2-0 for the visitors.

Striker Minh Nguyet made it 3-1 for the former champions at the 67th minute which saw a red card given to Myanmar’s Moe Moe War. — VNS

Do Thanh Dung
Lecturer of English